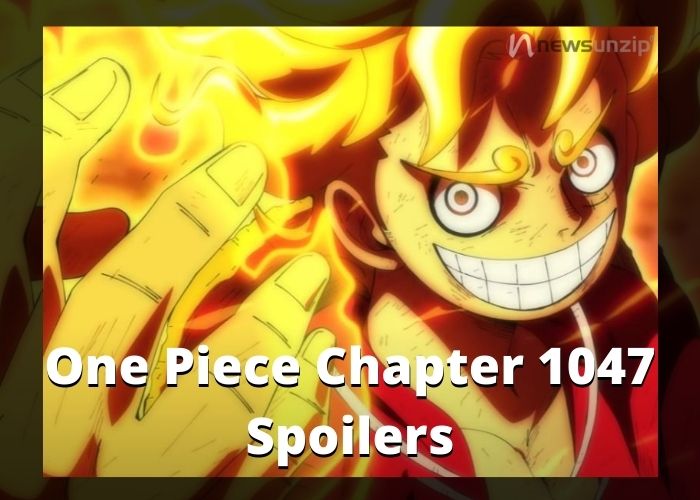 About One Piece Chapter 1047 Spoilers – In today’s article, we’re going to talk about the current and possible future events of the great battle that’s currently going on in Onigashima. Because as we are getting closer and closer to the end of Luffy’s confrontation with Kaidou. We are faced with a lot of new questions, the biggest of which is what is going to happen to the floating island after Kaidou’s defeat.

The World Government and the Marines are currently in the water, so we have to remember that even if the island falls, there will still be people on it. We are thinking about the fact that Zunesha is also around the islands. What will happen as our story moves forward?

So during One Piece chapter 1046, we saw that Raizo really was the center point of the story. And with Jinbe held together, they were able to hopefully extinguish all the flames that are going all throughout the castle of Onigashima. Now, this one act may be the thing that saves the most lives throughout this and also demonstrated this amazing trust between these two individuals because Raizo and Jinbe may not know each other that well or even at all, but because they’re fighting for the same goal, they were able to bring both of their great abilities together to save everyone else around on the island. But the most important events of this chapter still involved this amazing fight between Luffy and Kaido. We see dialogue between the two of them and Kaido still really isn’t understanding what’s going on with Luffy.

Chapter 1047 is about Everything About One Piece.

He asked him who he was because of his changed appearance and power. While this transformation is still going on, we learned that it is possible that this fight might be coming to an end because in the last chapter, Yamato confirmed that Kaidou is tired because he noticed that the flame clouds he was using to keep Onigashima aloft were starting to go away. The end of the fight is very close with this statement. If Kaido wins, the entire island of Onigashima would fall at once, because of the clouds that are keeping it in the air.

“With the power of the devil fruit that he possesses, it is going to come down to whether or not he can step up and start creating clouds of his own. The closest thing to saying that it was a failure is that it was a copy of Kaidou’s fruit, but we know that he has the ability to change it to a dragon and so it’s safe.”

“We are going to talk about what could be happening and what our expectations are for one piece chapter 1047. We know that he is going to have to overcome his fears in order to continue our story. If he doesn’t keep these clouds or make them save the island, everyone will die, and everyone on the ground nearby will as well.”

One Piece Chapter 1047 was leaked online.

“It’s possible that we will finally see Momonosuke, build up his courage, and use his clouds to get the island to safety. Kaido still has items inside his castle that could cause amazing destruction and although Yamato froze all of the bombs with her devil for power, it does not mean that it will stop these bombs. When Big Mom fell from the castle and hit the ground, all of the rubble caused a lot of destruction.”

“We don’t know if big mom lost her life or not, but we know that she caused all of this damage. It is possible that she will show up in a future chapter or episode. Charlotte Linlin is one of the most powerful characters in the story. The people on the floating island will not survive. She is probably going to come back at some point because she is so durable.”

But if Wano were to be hit by Onigashima, we’d have to consider that this would be an entire disaster and could take out multiple islands with everything that’s going on in the skies in the city below in the capital. We know that the citizens of Juan are celebrating the big party so nobody may ever even know or see Onigashima floating above them. And nobody knows about the fight or Kaidou’s pirates or the alliance between Luffy pirates and the samurai. of this is known so all of this could come nearly right before they see the island start to fall.

The release date, timing, and schedule of One Piece Chapter 1047 were leaked online.

The island has been getting closer to the flower capital. It may be in the next chapter that he finally gets the chance to create his clouds to at least divert the island from falling into the water, or it may be that he keeps it locked. Just like when his father held all of his vessels above the boiling oil many years ago, this could be a similar moment for him.

“There could be great ramifications once the fight between Kaido and Luffy is over. We know that this should be going back on, so we’re moving on to Kaido and Luffy. In one of the last panels of the last chapter, we saw a man in the sky holding on to a lightning bolt as if he were going to throw it at Kaido. We don’t know if he has the ability to summon lightning, like he does in his Red Hawk attacks, or if he can grab lightning because he’s made of rubber.”

“This advancement in his powers is very intriguing. Even though Kaido has an incredibly strong skin, it doesn’t give him any resistance to electricity, so this attack will have a great effect on him. Kaido is going to have to step up and create clouds when he starts to fall down.”

“There is a chance that Kaido is nearly defeated if the spike comes to some kind of climax. We have to bring Zunesha into the equation because we know that he can hear the drums of liberation which are being emitted from Luffy’s heart, so perhaps he will intervene or be the final thing that brings Kaido’s defeat to reality. It is possible that the big elephant is attracted to where the fight is occurring because he wants to confirm that the joy boy has returned. It has been speculated in the community that once Zunesha is in Wano, she will return.”

Zuo could be placed in Wano if Zunesha took it back. Zuo can become a part of the country as this might be one of the goals or missions that he was given by Joy boy in the past. We also have the marine showing up in Wano, as well. The Marines are going to be able to capture any pirate that they can and anyone who survived the confrontation against Kaido, so who knows what will happen. According to the chorus, if the Marines are ordered to go after him but not to defeat him, at least get him in custody, they may be able to confirm that he has a new power and has awakened the ancient devil fruit.

“In order to bring a swift end to Luffy, or at least bring him down so the World Government can get their hands on it, they are going to have to send someone strong to Wano, and the only person who could possibly get there fast enough would be Kizaru. The last time we heard anything about Kizaru was when he was stopped from going to Wano because they didn’t know the power level in Wano.”

The ending of one piece chapter 1047 is explained.

“Kizaru was at the Marine headquarters waiting for the orders to come. Some time might be given for the sailors to contact back or at least be alert by the Gorosei and then have Kizaru dispatched from there. Even though Kizaru travels at the speed of light, we don’t know the distance that he would have to cover in order to get to Wano or if he could even get there in a straight line. Even though he can get there quickly, he might end up showing up late. This might be a bigger part of the plan to have the person with the sun god powers wear out by the world’s strongest creature and then move into strike and attack to get the devil fruit back.”

About One Piece Manga Series.

“Since everyone would be too tired to face them, we don’t know what the side effect is going to be from him being in gear fifth, but we know that every evolution he has had there has been some kind of consequence. It would be the same for this new awakening. Even if the Marines and Kizaru show up to take on Luffy, we could also see allies of the Straw Hats show up, because everybody has been waiting for joy boy to return.”

“It might be that we get support from other characters we haven’t seen in a while. With it being a zone, we might get to see how Oda develops a better story about Zoan fruits in general, because we have seen a lot of logia and pyramids.”